CCT BVI has signed on to be the exclusive telecommunications sponsor for the upcoming Virgin Gorda Easter Explosion scheduled from March 31 – April 2.

CCT’s Chief Executive Officer, Mr. Averad Penn commenting on the signing stated that, “CCT stands with the community in preserving and keeping culture alive on Virgin Gorda especially that it is the longest existing event to be held annually on the island.”

Mr. Penn also encouraged residents to continue their participation in keeping tradition alive on the island despite the challenges incurred after the passage of Hurricane Irma.

CCT's Marketing Manager Mr. Recaldo Richardson, also commenting on CCT’s involvement said, that he is looking forward to engaging with the Virgin Gorda community once again as a sponsor, and participating in all activities schedule as we will be offering services and specials. Mr. Richardson also encouraged persons to travel over to Virgin Gorda for the weekend while encouraging residents on the island to come out to the activities planned.

The activities scheduled during the Easter Weekend celebration will include a Cultural Food Fair and Kids Day on the Little Dix Bay Field on Saturday, March 31; Hon. R.T. O’Neal Hat Parade from Valley Methodist Church to St. Mary’s Anglican Church, and the Easter Egg Hunt at the Walters Recreational Park on Sunday, April 2. To wrap-up the weeklong of events is a Beach Picnic and Family Fun Day on Monday, April 2 at St. Thomas Bay Beach.

CCT BVI was voted the Best Cellular Service Provider in the BVI and is the BVI’s Premier 4G LTE Network. To learn more about CCT BVI, visit www.cctbvi.com or CCT BVI Facebook page.

CCT BVI wishes everyone a safe and enjoyable Easter celebration. 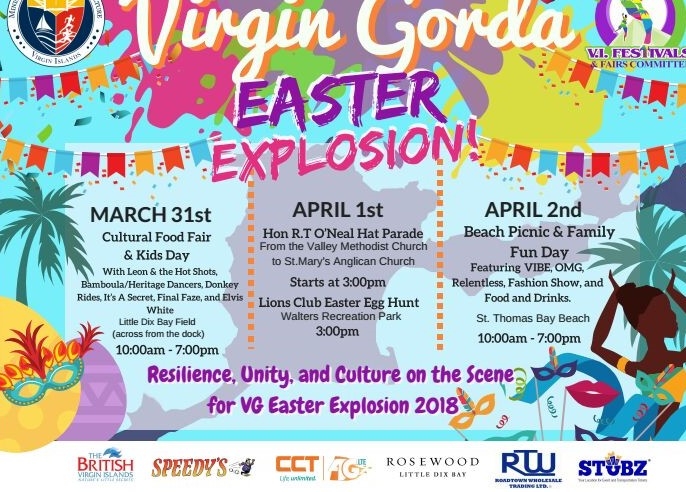